Chasing the Ace is a GMless, card-based storytelling game of mecha drama. In it, players take on the role of a mecha squadron lead by the legendary Ace. The Ace has led your squadron out of deadly situations more times than you can count. Together you've saved thousands of lives over the course of the war you find yourselves in. But the Ace has confided in you a secret: at midnight tonight, they are going to steal their mecha. They have not told you why, but they have asked you to join them. With you, they say, they stand a chance. You have until midnight to decide.

Failure risks execution for treason. But do you even want to help them?

Chasing the Ace is a Descended From the Queen game for 3-5 players. To play it, you just need a deck of regular playing cards and this book. It is a game of interpersonal drama set amidst a war between a paramilitary organization, its mecha pilots, and monstrous beings that threaten the world. Together, you will define the war, the Ace, and your characters over the course of play, until you are finally faced with your decision. Each session takes around an hour to play.

Check out the demo file below, which lays out the full rules and setting premise.

In order to download this game you must purchase it at or above the minimum price of $3 USD. You will get access to the following files:

Support this game at or above a special price point to receive something exclusive.

If for any reason you cannot pay the full price of Chasing the Ace, please be encouraged to take a community copy at pay-what-you-want.

"Descended From The Queen" games are always a hit but "Chasing the Ace" is especially good. There are deep and interesting prompts that tee you up to play around in the common tropes of the genre in the ways you would expect, but also give you the flexibility to take things in a novel direction. This is a great game to jump into for a night with your Mech-loving pals.

I played this with three friends the other night and we all had a great time! My group is very improv and character/storytelling-focused so it took us about three hours to play half of the deck. All of the prompts we drew were excellent, and we really enjoyed having the freedom to hand off prompts and/or ask each other follow-up questions.

We came away feeling overall very happy with the game itself, though we wished we'd seen some prompts that explored relationships between the squad members, rather than always just focusing on the Ace.

Being allowed to draw one more prompt after handing off a prompt would have been nice as well - it was always nice to hear another player's perspective, but it left the active player somewhat behind in development/playtime relative to everyone else.

But all in all, I got to live out my space found family dreams and I loved every second of it, thank you!

Finished a game with just three of us, it was SUPER fun and exciting! It's definitely a collective storytelling experience; we had one person who'd taken multiple improve classes and one who was rather unsure of themself. In the end, both had a really good time figuring out who they were!

Left me wanting more in the best way. Not super replayable with the same group, if you ask me though, although not necessarily a bad thing.

Just finished playing this with my group! We did this as sort of our character creation / session zero to plot out a few universe details on a longer game, which. I know is not super a goal this game had? But still ultimately ended up being a pretty effective engine for!

At the beginning we did very minimal character design just to get the ball rolling, and over the course of the game found ourselves really invested in the little team we'd created. Definitely a great play, great work on this!

We really enjoyed playing this. I agree with most of the points brought up by Kumada1 below, but ultimately we found the process very rewarding. We definitely had a few moments we felt the need to disconnect from the flow of the card story and establish additional things. It made a difference for us to determine our individual call signs and roles within the squad, but I think perhaps going through that in the beginning of the game wouldn't have been as powerful. We sort of came around to understanding that we needed that information to continue, but being told we needed it in the beginning might have changed the overall direction we took.

Quality game, thank you for your hard work in creating it!

This is a neat, storytelling game that uses a deck of cards as a prompting tool to tell an Evangelion-esque story about a pilot who realizes their hero is not who they thought they were.

The mechanics are simple and the game is short, but I also ran into a few places where it wasn't entirely clear to me how things were supposed to be played. Are you all the same pilot? Are you all different pilots? Are you supposed to frame scenes and weave a narrative in between questions, or just address them one after the other?

Folks who are familiar with this type of game will be fine, I think, but folks who aren't might get quite a bit lost.

The questions themselves are flavorful, and they really do drill down to the core of the player(s?) relationship with the Ace, but I wish there was a little more guidance or structure in the setup. I think even "you are a team of pilots. Each player defines three features about themselves," and "you are on your last mission with the Ace. As it's happening, you're flashing back to memories of them. For each flashback, draw a card," would help.

Overall, I think I'd recommend this to anyone who likes mech dramas (or Ace Combat) and cooperative storytelling, but with the caveat that they'll have to make some judgement calls right off the bat.

Thank you very much for the feedback! How best to onboard someone into this game is something I'm going to keep mulling over, but for now I've attempted a small adjustment with an introductory paragraph in the new version. I hope that this makes the onboarding a little easier, but this is something I will continue to work on!

Ah, thank you for the catch! Fixed!

Thank you for this great game ! The descended from the Queen label deserved a game of emo mecha, and Chasing the Ace is really brilliant 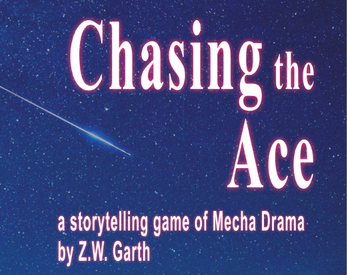 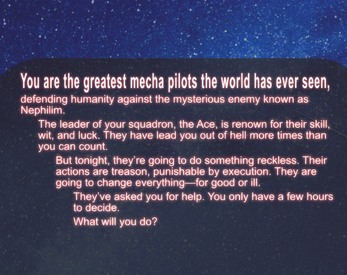 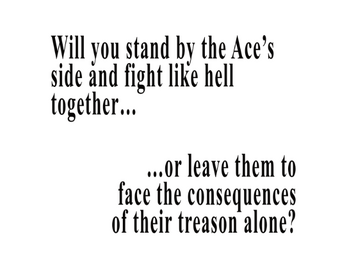 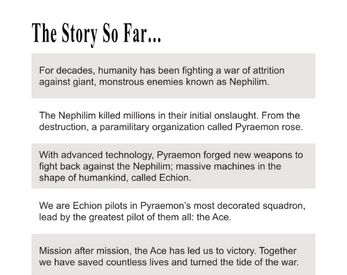 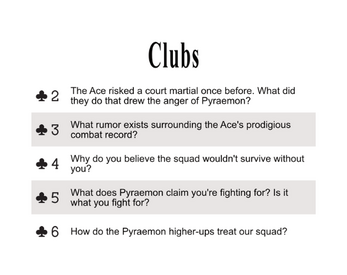